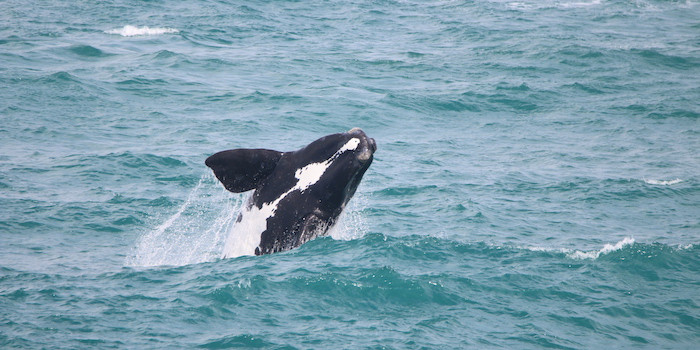 From its teeming oceans to its spectacular vistas, the Overstrand (the stretch of coastline from Hermanus through to Gansbaai) has plenty of marvels to recommend it, but for marine wildlife enthusiasts, The Marine Big 5 is unsurpassed. The term was coined in Gansbaai, arguably the epicentre of marine tourism in this region, and refers to the almost unprecedented co-habitation of the Southern Right Whale, Great White Shark, Cape Fur Seal, African Penguin and Indo-Pacific Bottlenose Dolphin.

If you’re visiting De Kelders in the months from June to November, a phalanx of photographers aiming outsized lenses seaward can only mean one thing for certain: the whales have arrived. The Southern Right Whale population swells at this time of year as they migrate to Walker Bay to mate and give birth, affording close encounters and the chance to witness some exhilarating pageantry.  De Kelders offers some of the best land-based whale watching in the world! The sight of a Southern Right launching above the water, suspended in the air for a balletic moment before thundering back into the distant, silent horizon, is known as ‘breaching’, and although I’ve seen this spectacular display dozens of times now, it’s impossible to feel even the slightest hint of indifference each time it happens. It is poetry. But to be mere metres away from a nursing mother and calf gently lolling together inshore is more arresting in its beauty than even this; an intimate and rare blessing you’re sure to never forget. With adult Southern Right Whales tipping the scales at 60 tons, they certainly put the ‘big’ in the Marine Big 5, but it’s the graceful beauty of these colossal creatures which really captures the imagination. 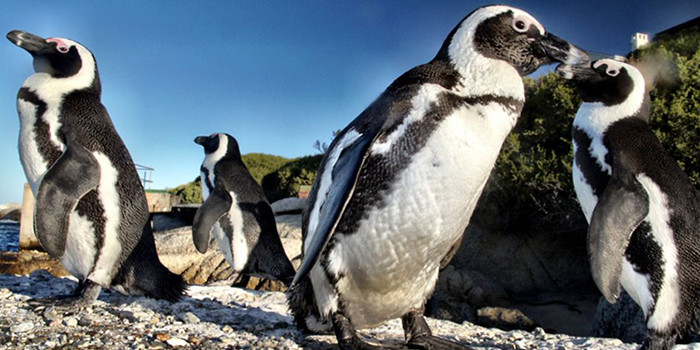 For the more intrepid thrill seeker, getting nose to nose with the undisputed kingpin of the seas, the Great White Shark, may be more your speed. Swimming unassailably at the top of the food chain, the Great White Shark commands respect like no other marine animal. Their predatory efficiency and enigmatic nature inspire awe and fear in equal measures, but the numerous shark cage diving operators in Gansbaai are helping dispel enduring myths and misconceptions surrounding these eerily beautiful animals. Gansbaai has been dubbed the Great White capital of the world, drawing adrenaline junkies, scientists and conservationists alike to study and admire them under the safe guidance of highly trained experts. And for the truly cavalier, dispense with the cage altogether and swim free with these prehistoric masters of the underwater domain. And no, that’s not a joke.

The Cape Fur Seal, African Penguin and Indo-Pacific Bottlenose Dolphin may make up the tail end of the Big 5’s hierarchy of size, but they are crucial to Gansbaai’s unique marine eco-system and a delight to see in their natural habitat. The proliferation of playful and curious Cape Fur Seals in Gansbaai is mainly due to the incredible 55 000 strong colony on Geyser Rock, an island offshore from Gansbaai. Dyer Island lies just adjacent to this, and is where you’ll find the breeding colony of the endangered and quirky African Penguin, the only of the 17 penguin species worldwide which breeds in African waters. Many, myself included, world argue the Indo-Pacific Bottlenose Dolphin to be the most endearing member of the Big 5. They almost never venture out further than waters of 30 meters in depth, so consistent sightings and interactions are very probable. A subspecies of the Bottlenose Dolphin most commonly seen in aquariums, it’s a joy to see the African Bottlenose revelling in the waves and streaking full-throttle through the open water.

Locals and seasoned visitors say it isn’t uncommon to say up to three of the Big 5 on any given day in Gansbaai. How many will you see in this ‘Serengeti of the sea’?