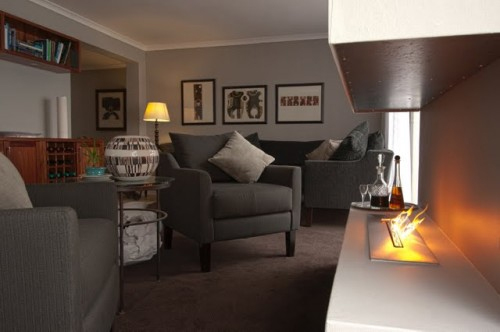 Winter here is dramatic – most days the sea is wild and the wave watching is superb. This time of year is called the ‘green season’ in the Western Cape because it’s the rainy season, and the Cape Floral Kingdom comes to life. Because of its proximity to the sea, and the warming influence of the ocean currents, the climate of the De Kelders area is mild. Frost is rare, and temperatures are not extreme. The average winter temperature is 17 degrees C, and it can rise to 25 degrees.

Winter also sees the start of the whale season along the Overberg coast. This area offers some of the best land-based whale watching in the world between June and November. De Kelders is one of the prime whale ‘nursery’ areas for Southern Right whales, with its sheltered coves, and gently sloping sandy sea bed.

Winter is also the best season to view Great White Sharks in Gansbaai, with peak shark season from April to October. Great White diving has great value for conservation, as for the first time the Great White is worth exponentially more alive than dead! For many, seeing the majestic Great White in its natural habitat is a life-changing experience – their fear of these sharks having been transformed to fascination and admiration. We therefore believe that Great White tourism in Gansbaai has brought about a positive conservation victory for the sharks.

Cliff Lodge has an ideal location for enjoying all that winter in the Western Cape has to offer.

You can watch the gentle Southern Right Whales from the comfort of our sea front conservatory, and enjoy the spectacle of the wild winter sea while sampling our superb cappuccinos in front of the fire in the guest lounge.

Hiking in the Overberg mountains or along the rugged De Kelders coastline is also a treat in the winter months with cool weather and a proliferation of fynbos.