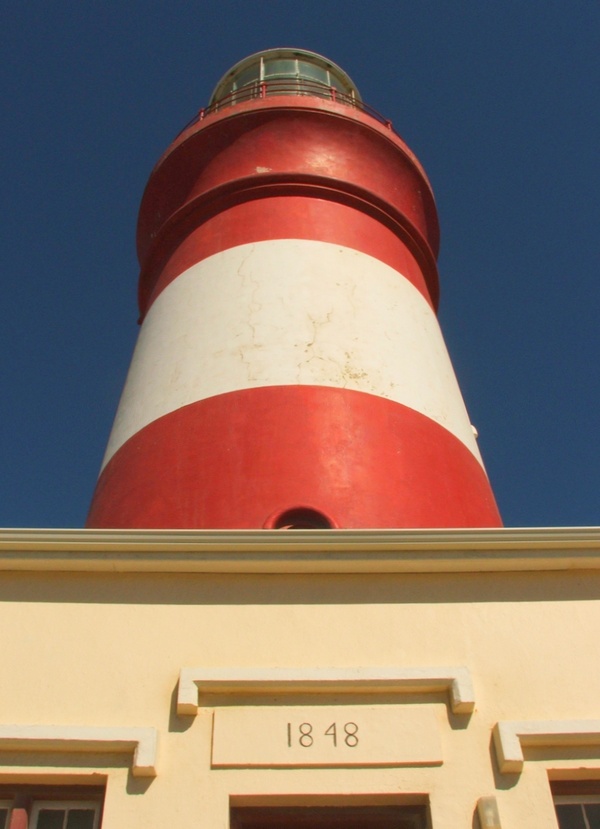 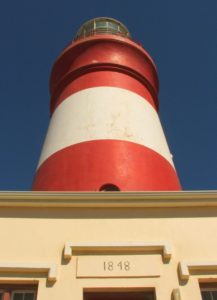 Cape Agulhas is the southern tip of the African continent, lying on the Agulhas Plain of the Cape Overberg. The towns of Cape Agulhas include: Arniston / Waenhuiskrans, Struisbaai, L’Agulhas, Napier, Bredasdorp and Elim.

Cape Agulhas is located at the very tip of the legendary “Foot of Africa” where the cold Benguela current of the Atlantic Ocean and the strong Agulhas current of the Indian Ocean meet. Early Portuguese seafarers rounding this dangerous point called it Cape Agulhas (Cape of Needles) because they found that the needles of their compasses showed no deviation there. The country’s second oldest working lighthouse was built here in 1848 in the Pharos style.

This lighthouse has been restored and its 11 million candlepower beam can be seen shining over the dark ocean for 30 sea miles on a clear night. The lighthouse now houses a tea room and the only lighthouse museum in South Africa. The koppie behind the lighthouse provides a panoramic view of where the two oceans meet, ships pass and whales play.

The actual Southernmost Tip of Africa is 1 km west of the lighthouse and is marked by a simple cairn (pile of stones). East of the cape are “vywers” (fish traps) which were created by the KhoiKhoi thousands of years ago. These traps were made by building dams across shallow gullies so that fish would be stranded in them at low tide. Some “vywers” have been maintained through the centuries and are still used today.

The coastline at L’Agulhas is known as the graveyard of ships because the winds, high swells, treacherous coastline and erratic weather conditions have caused countless shipwrecks. At least 140 ships have come to grief along this coast since the middle of the 17th century. The only wreck visible from the shore today is the Meisho Maru 38, a Japanese vessel that was wrecked in 1982.

The Agulhas Plain is still wild and unspoilt with a fascinating coastline of jagged wind- and water-sculpted formations. The Agulhas National Park, De Hoop Nature Reserve, and De Mond Reserve have unique, dramatic landscapes and amazing fynbos. The limestone and Elim fynbos plant species especially add to the unique character of the area. This area is part of the Cape Floristic Region, one of the richest areas of biodiversity in the world. There is also a large variety of animal and bird species in the Agulhas area, many of them endemic, and found nowhere else in the world.

Cape Agulhas is a well worth a visit, and is an interesting day trip to consider whilst staying at Cliff Lodge. The drive to the southernmost tip takes you past Struisbaai  – the longest white beach in the southern hemisphere, and the wine farms of Elim, as well as some quaint Overberg villages.