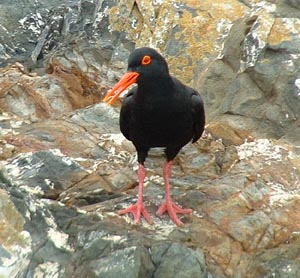 The Overberg has more than 330 bird species with at least 20 endemic species. This impressive diversity is due to the variety of habitats in the area.

The coastal area around Cliff Lodge has a variety of habitats and food sources for birds. The many fruiting trees and shrubs attract fruit-eating species such as Cape Bulbuls and Mousebirds, as well as insectfeeders. Sugarbirds and sunbirds also use the area as stepping stones to the mountains. An endemic to the fynbos biome, Cape Francolins are often seen in the low fynbos along the coast.

Nearly half of South Africa’s 63 diurnal raptors have been recorded in the Overberg. The light brown solitary Steppe Buzzards are migrants from Eurasia and may be spotted on the phone and power lines along the R43 to Hermanus. Jackal Buzzards are also often seen in the area. Black Harriers (near threatened) are endemic to southern Africa and are regularly recorded around De Kelders, especially in early summer. Rock Kestrels are a common site, often in pairs on our weather vane. Another bird of prey frequently seen along the roadside is the Blackshouldered Kite. Spotted Eagle Owls are a familiar sight on the cliffs and overhead lines.

Dyer Island off of Gansbaai is a breeding ground for many sea birds such as Jackass Penguins, cormorants and Cape Gannets. Other coastal species that may be seen in De Kelders are terns, plovers, gulls and of course the striking African Black Oystercatcher, one of South Africa’s rarest coastal birds. Oystercatchers breed from October to March and are very vulnerable to disturbance by people and vehicles. These birds are regularly seen on the rocks in front of Cliff Lodge.